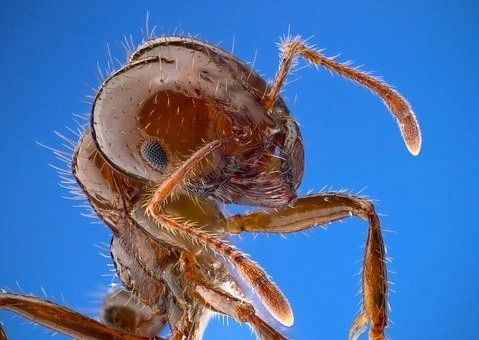 Fire Ants are not a threat that can be taken lightly. Although small in size, they are aggressive and attack as an army going to war. There can be as many as seven million ants in a colony.

Entomologist Mike Raupp said, "They live in a mound. It's a large mound that you will be able to see on the ground. If you bump into that nest, they will swarm out immediately and aggressively attack you, and no other ants will do that. There are no other stinging ants in North America. So, if you get stung by an ant, you can pretty much assume it's a Fire Ant."

While other ants will bite you and then spray acid on the wound, Fire Ants will grab you and hang on. They then will sting you with a toxic venom. An estimated 5 million Americans are bitten and stung by Fire Ants every year, and nearly a dozen Americans die. In the Report of the Fire Ant Subcommittee of the American Academy of Allergy and Immunology, 29,300 were physicians surveyed, reports of 83 fatal and two near-fatal Fire Ant-sting reactions were received. Most anaphylactic deaths were reported from Florida (22).

Someone who is bitten by a Fire Ant will know it almost immediately. The bite and sting are very painful to the skin, and within 20 minutes, the skin will turn red and blister. The area will have a terrible burning sensation. This is why they are called Fire Ants. Due to the nature of the swarm attack, the amount of venom injected can be deadly to children and those with weaker immune systems, especially the elderly. Symptoms of anaphylaxis are:

Anaphylactic shock is a real medical emergency and can result in death. In 2017, biting Fire Ants were to blame for a man flipping his SUV on Interstate 10. If you see any ant infestation or mounds, don't take any chances, call us today to come out and address the issue. At Quest Termite & Pest Services, we are experts in the assessment, identification and eradication of all dangerous insects, including the evil Fire Ant.